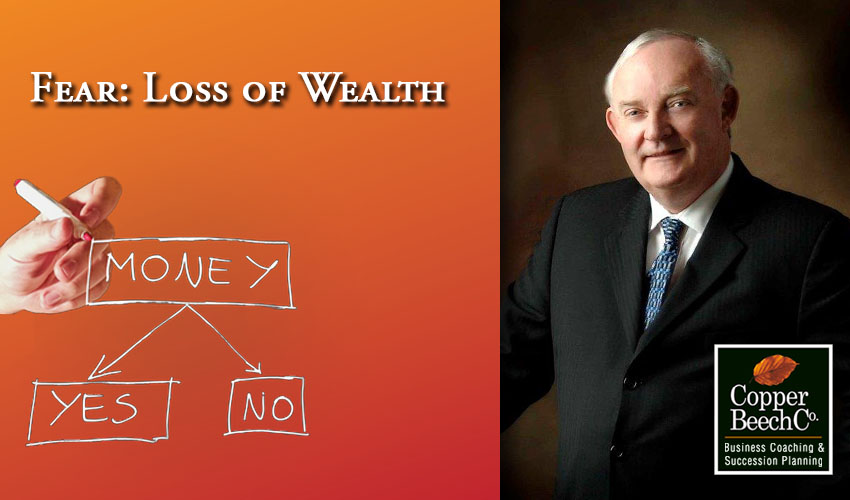 I often talk to new clients about three fears that govern the actions of business owners everywhere. The fears are:

These fears are largely intertwined but any one can be an over-riding factor that stops business leaders and their relatives from working on a transition plan. The process of addressing each of these concerns actually helps a family prepare and agree upon the process of transition.

Transition plans are not only about succession and retirement; they are strategic, looking ahead at future leadership but also at growth and direction the business could or should take.

A strategic view to answering the “loss of wealth fear” would be to plan the diversification of wealth – moving wealth, tax effectively, out of the operating company. Use of holding companies, retirement saving, executive pension plans and permanent life insurance all have a role in a diversification plan, but they take time and some discipline. The rewards, however, are substantial.

I recently sat at the kitchen table of a couple who are in the final stages of selling their business to a son. Ten years earlier we had started a diversification program that resulted in this couple having over $2 million in tax sheltered, creditor protected savings outside the business. By making the decision to diversify their wealth outside the business they had overcome their fear of loss of wealth and, because they were no longer dependent on income from the business, they were also able to offer their son extended terms in the purchase of the business reducing his stress too.

As they followed the plan to create wealth outside the business it became clear to them (and me) that they were also addressing the other fears; they would not give up control until they had established the independent wealth and potential for family conflict was mitigated as it was apparent to the siblings not in the business that their legacy would come from the independent assets.

As we sat at that kitchen table they reflected on the decision they had made ten years ago to diversify their assets. They realized what an important decision it had been not just from a financial aspect but it also taught them and their children the value of taking a strategic view. Spending some time away from the day-to-day and looking at the way the future could unfold.

It’s a lesson that all business families must learn if they want the wealth and prosperity they create to last for generations.