The Power of Family Meetings

The Power of Family Meetings 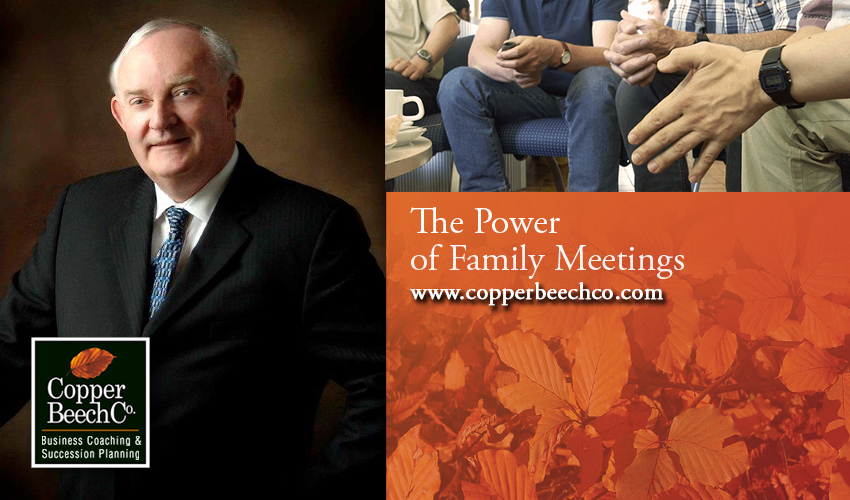 One by one they came over to me and shook my hand.

Dad was in his eighties, Mom was mid-seventies, two sons and two daughters in their forties and fifties.

They had just completed their first family meeting and as they thanked me they each wondered why it had taken so long.

Dad and mom had contacted me to help them figure out what to do with the business they had built. One son worked in the business, the other children had built lives outside the business. As I talked to Mom and Dad gathering the information around the family and the history of business it became clear that no one in the family ever talked about a plan, in fact no one talked about the business or the wealth of the family. This is not unusual, generally because no one knows how to start the conversation. Parents avoid the discussion because they don’t want a family conflict while children don’t start the conversation because it’s “their money…they can do what they want.” It’s a shame because avoiding the conversation actually leads to conflict, unnecessary tax costs, financial loss and perhaps even loss of the business.

As dad shakes my hand I see moisture glistening in his eye. I know this has been both an emotional and a valuable meeting for him, possibly the most valuable he has had in his over 50 years in business. Prompted by a health scare he has met with his family, told them of his story and his wishes going forward. His children and his wife have responded honestly. The cards are on the table and can be dealt with, concerns created in the imagination of each family member have proven to be unfounded.

I think back over the meeting. The fact that it was called by Mom & Dad caused concern with the sons and daughters and one son (Jeff) in particular sat in the classic closed up pose; sideways to the dining table, legs crossed, arms folded, silent. As chair I set the rules, one person speaks at a time, respect must be shown for everyone, honest and frank discussion is the objective.  As the meeting progressed Jeff slowly unfolded and then he began to participate. The conversation was lively and the parents learned things that completely surprised them about their children, their thinking and the goals of their brood.

If there is one thing that families in business should do on a regular basis, it’s hold a family meeting. It allows for clear communication and limits wild imaginings. Set rules for the meetings, rules of conduct, rules about who should attend and even where the meetings are held. It’s important for business families to remember that if the adult children do not know the plans of the senior generation, it’s hard for them to make their own plans.